Recent Posts What's new in the land of Vanyanan?

It is Christmas Eve, and it’s not even noon. I’m sitting outside without a jacket, wearing a t-shirt. Welcome to Texas! We have a dozen little springs scattered throughout the winter. We associate Christmas with snow, but isn’t spring weather a better symbol of Christmas? We were in the winter of our sins, but here today a baby is born, ‘tis Christ the Lord. And here, in mid-winter, is a little burst of Pentecost. The Holy Spirit descends, we take off all our armor against cold and sin and death, and we have coffee on the front porch. … (Read More)

I live at the corner of Gibson and Parrish. “Parrish,” with an extra R that makes me wonder if there is some word I don’t know or if I really live next to an elementary school and at the corner of a misspelling. I’d call it a typo, but it’s not a slip of the finger. Or, if it is, it’s a slip of some secretary’s finger, recorded in the city records and in my street name forever. … (Read More)

Christmas is almost here. Decorating the tree is a study in human nature. I never want to go through the trouble. But, then I begin and it proceeds happily, and it is done. We turn on the tree lights, we turn off the house lights, and then there is peace. … (Read More)

I began to write this in my notebook with the line “When I was young, every variation from linear progressive time was a nuisance.” And as soon as I wrote it, I realized it wasn’t true. To be young is to live an entire life in the grooves of cyclic time. Life is summers at Benbrook Lake, Thanksgiving, Christmas. The annual trip up to Dalhart which smells of horses. Cartoons on Saturday morning. The funny pages on Sunday afternoon. The favorite TV show Friday at 4. … (Read More)

We have discovered why it is actually so difficult to interview programmers. We want to know if they’ve acquired the thousand and one little lessons that add up to being good at this. And those lessons mostly consist of a sense for a good design versus a bad one, identifying the correct abstraction and the right data structure, and knowing when they have chosen poorly and how to fix it. … (Read More)

Once, in the long, long ago, the prophet descended from the mountain. We called him Alan Kay, praise be upon his name. He told us the gospel of objects and the priests heard him, and the priests told the people, who had been suffering greatly. … (Read More)

Someone on a social network asked the question “Is it possible to have 10 years experience in C#, .NET, jQuery, and SQL and still know less useful information than a coding bootcamp graduate.” It is very possible. Also very unlikely. … (Read More)

Pilgrims of a Shattered Spacetime

We don’t know what caused it, but the web was shorn ten years ago. Every life proceeded linearly as it always had, but the cords that bound them into synchronicity were severed. We continued on, as best we could. It didn’t change much. You may see a young woman on the subway wearing a sweater in July and see her again in a summer dress in February. Occasionally, you see more disturbing things. The priests and inquisitors ignore us and at first seem merely bizarre. Until I saw them descend on some failing penitent on their own strand. He must have violated some indiscernible discipline. Then they were all dead eyes. And hooks. Dead eyes and hooks everywhere like a nightmare vision of Ezekiel’s seraphim. I hope that future is distant. Or that timeline lies on some thread of the multiverse that we never travel down. … (Read More)

(I wrote this shortly after a Bible study in a notebook, and it’s pretty chaotic. Don’t assume anything is a coherent thought.) The gospel of authenticity can only be true if authenticity means true to our redeemed nature. It cannot mean true to the Fall. In pop culture, authenticity means true to your present self. In Christian, to be true at all, it must mean true to our redeemed, glorified self. But, we are not yet perfectly that self. We see it “in a mirror darkly.” This is where Agnes Callard canhelp. Her version of aspiration is that aspiration is our present self attemptinmg to impersonate the (poorly-grasped) values of the aspired-to self. Agnes is a philosopher, so her version lacks “grace.” The aspirant is stuck pulling herself up by her own bootstraps. The Christian, however, has grace. The system isn’t closed. In this view, “authenticity” reduces to “cooperation-with-grace.” But, in this sense, authenticity cannot mean lack-of-pretension. God does not make use saints overnight. He may not in this life. We must be pretentious. We are (in Callard’s sense) aspirants. Where does this leave the cult of authenticity? Muddled, but not really wrong. There is good and bad pretense. There is not only the saint, there is the pharisee, the one “even Christ could not forebear to strike.” Callard refers to this, we must be pretentious somehow without being snobs. Maybe the answer is that our pretentions are private, and our vulgarity (orig sense) public? This makes us reverse hypocrites? But, then we are scandalous (But the LORD was/is scandalous.) Too many sense of the same word. we should be scandalous how the was/in, but not otherwise. Indeed, the LORD was scandalous in his vulgarity (orig sense.) I should re-read Callard’s Aspiration. I think it helps with this door. What is akrasia for her? I don’t remember. Is it our imperfect knowledge of the future-self’s values? Or that we are not yet our future-self? Our values are a super-position of self and future-self? Translation: we “wear Christ.” “Wear Christ” implies hyporcrisy: the outward showing of holiness, but inside, the sinnger. Today, in our culture, what is the best, or least dangerous, way spiritually? To pose at holiness? Or to pose at vulgarity? Our culture is obsessed with vulgary. We always were but it is worse (is it? We are elitist.) Evangelism is obsessed with vulgarity? Closer tot he truth. Is this at the heart or is it reaction to the “revolt of the elite?” (I need to actually read Lasch.) We should not try to be the generic Saint, that way lies phariseism. The generic saint is the LDS, 50s sitcom, whitebreak wholesome hypocrit who never shocks. Instead, we are the ‘little flowers.” We must try to be ourselves as saints. St. Thomas Aquinas is not at all St. Therese of Lisieux. Both are saints, neither is the generic saint. This makes our task harder! We do not aspire to be saints. We aspire to be St Kevin. St. Laura. St. George. We aspire to conform ourselves to an image that exists only in the mind of God and who we see only faintly. Absent grace, this is impossible. And with the grave given, difficult. We are damanged machines, in a way, but we are not the same machines. We are specialized variations on a model. We must discern the norms which are mere averages from the law of our nature. We must “test the spirits.” That which makes us unique that conforms to God is good, and we must be authentic to it. That which makes us unique but does not is a defect which we must cure/suppress/attempt to operate in spite of. Sigh. The liturgy of the machine-god again. Does it’s presence invalidate the thought? I don’t think so, but it’s worrisome. The cult of authenticity ends in Adamism. God knew the fall of man by his clothing himself. But God did not forbid clothing, but instead, in the Law, regulated it. In the garden, we were authentic. In the Fall, w must be inauthentic, but in the exact right way. Holiness is no longer natural, our soul rebels against it. We must suppress our rebellious souls with being outflanked by pride. Saints, not pharisees. Conformed to holiness, but not to the LDS version of it. Authentic, but to God’s unique vision of us, and not to our broken visions of ourselves, with the world as our only broken yardstick. … (Read More) 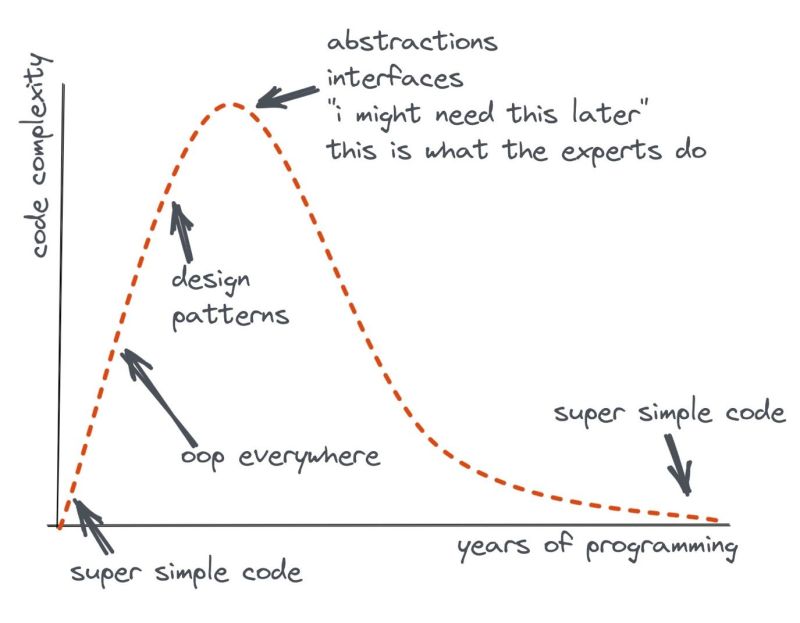 Programmer Rant on Complexity One of these is not like the other... A meme on LinkedIn accomplished its mission, if its mission was to “trigger” me. I’ve attached it here. It’s true, but it’s a paradoxical truth, and at the risk of pedantry, I want to explore the paradox. … (Read More)